The Brown Trout Fishing Season Opens in ! Get Your Licence
Sign In

Blackmans Lagoon is well known for growing large trout that can be difficult to catch.

Before we released them, we clipped their adipose fin. This was in preparation for a Fishery Performance Assessment so we could estimate the population and better understand the health of the fishery.

In the third week of July, we set 40 traps around the lagoon for two nights. We caught 291 brown trout. 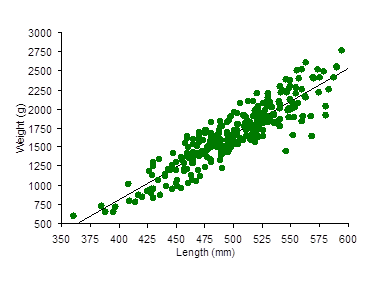 This graph shows the spread of the length and weight of all the brown trout captured during the survey.

An improved type of rainbow trout stocked in recent years has led to a small population of younger well-conditioned, healthy fish and some poorer older fish that have had trouble getting rid of their eggs.

For anglers using a boat, be careful when launching and be prepared to use four-wheel drive when retrieving your boat from the shallow, sandy, ramp area.

Fishing at Blackmans Lagoons is exposed to the elements but for anglers seeking a better than average fish it may be worth a visit.

A detailed report will be available from the IFS website in the coming months.

← Back to the news